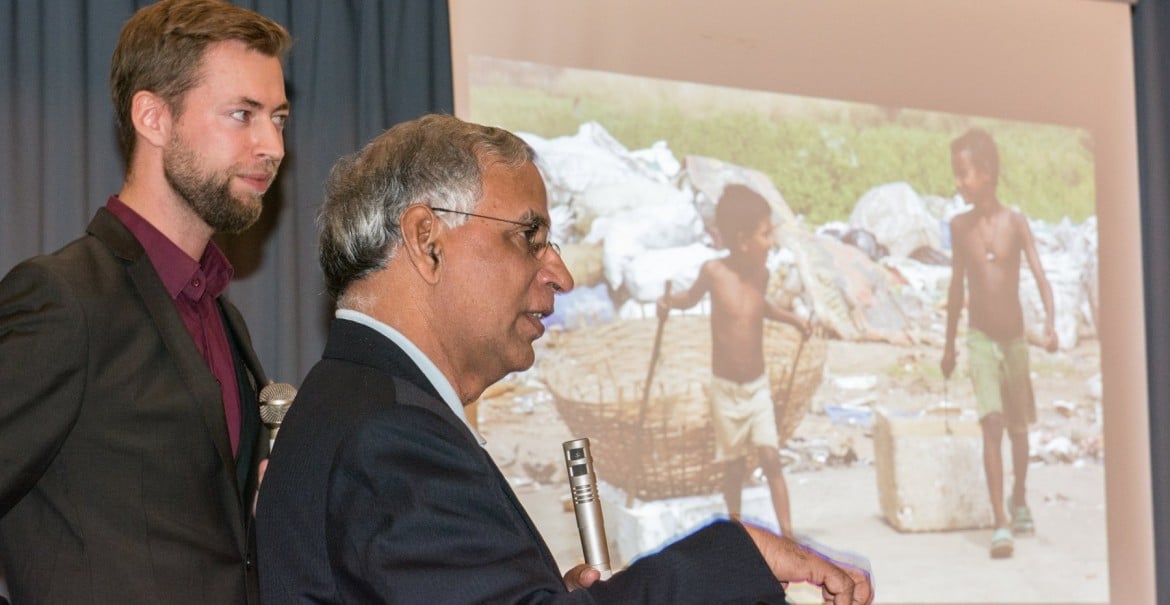 On November 12, a group of curious, open-minded  and engaged people of all ages gathered in the Catholic community hall of Königstein to get acquainted with Childaid Network and its Nepal and Northeast India projects. Large wall charts, colorful flyers and Asiatic décor invited to immerse oneself in the so very different world of the project regions. Delighted with Indian delicacies and tasteful drinks, everyone was quick to delve into intensive conversations. Central to the event were the talks of our project representatives. Sharing their very personal insights, on-site pictures and videos, the team drew a powerful picture of the progresses and challenges they face in their project regions of Northeast India and Nepal.“Mother Teresa’s heir” is what the Frankfurter Allgemeine Zeitung newspaper called him – now, Father Lukose visited Königstein for the third time to talk about his program for children of the streets of Guwahati. In conversation with our project manager Robert Ewers, he is pleased to announce that many of the 200 children entrusted to his custody in 5 orphanages are now finding their way into self-employment – provided with the loving care, good education and some seed capital to venture into a new life.

But next to this long-term engagement, the event also especially focused on the acute work needed in the slums and shanty towns of the megapolis Guwahati. More than 10.000 children there lead a life along railway tracks, live in and on garbage dumps or in the marshes. Many are exploited as drudges, thousands suffer from preventable diseases. It is estimated that 5.000 to 6.000 of them do not go to school at all.

With the help of donors from the “FAZ-Leser helfen” (“FAZ-newspaper readers help”) campaign and other sponsors, 40 motivation centers opened up for these children in the last two years. By now, several thousand children visit them regularly. Being established for the city to become more child friendly and the children to attend school and eventually find a job, these centers can improve the lives of many families throughout the city. Social workers and teachers look after the children during the day; playing with them, teaching them about hygiene and some self-discipline, but also about the fact how fun learning can be. They also work with the parents, persuading them to send their children to school and claim their rights. “The laws in India by now are exemplary, but social hardship, corruption and inequalities or the caste system often thwart the realization of children’s rights for everyone”, Father Lukose notes. “Nonetheless we are one big step closer to Father Lukose’s vision of a Guwahati that allows for a bright future of every child”, Robert Ewers confirms. The project, which is supported by Childaid Network since 2013, put more than 1.500 children in school and almost 1.000 young men and women completed their vocational education this year.

In Guwahati, Father Lukose has now handed over his tasks to the next generation of the congregation – he himself was shifted to Western Assamese Bongaigaon, where violent conflicts between tribes erupt since the 90s. Hundreds of thousands of members of different minority groups successively lost their homes and live in the jungle or provisory camps. Tens of thousands of migrants and refugees from neighboring Bangladesh additionally fuel the conflicts about land and influence.

The exceptional hardship of refugees, minority members and peasants of the region make it one of the focus areas for Childaid Network’s projects. 65 so-called barefoot colleges were established to teach thousands of children, most of them born in one of the local refugee camps. Additionally, 4 centers for vocational education enable 1.000 unemployed adolescents annually to learn a trade. The sister school of the Taunusgymnasium Königstein, a Don Bosco school in Amguri, also lies in this area. “50 Santhals are awarded a high school diploma for the first time this year”, Father Lukose tells us. A big achievement in a tribe in which more than 90% of the adult population is illiterate. Furthermore, with the support of the German Federal Ministry for Economic Cooperation and Development and of Childaid Network, a new, big vocational college is planned in Amguri for 2016.

Like in Guwahati, capacity building for self-help is the motto. Parents are encouraged to get active themselves and claim their rights from the government and lobbying at local administrative offices takes place to convince the local governments to take over responsibility for the schools. Girls’ Clubs have been established to empower young women to realize their dreams and talents. 12 Children Rights Centers take care of abused, neglected or exploited children.

Another focus of the project night was Childaid Network’s engagement after the devastating earthuquake in Nepal earlier this year. The epicenters were close to our project region Bhandar, where almost all buildings were destroyed or severely damaged. Dr. Ute Nieschalk, chairwoman of Kinder-von-Bhandar (“Children-of-Bhandar” Foundation) and board member of Childaid Network, responsible for Nepal-related projects, as well as Horst Hansel, honorary project representative, reported about the on-site situation together. The partner organization FRADS was present in the region first to aid with tarps and drugs. Affronting the monsoon season, Horst Hansel and his team set off to hike to almost all project locations of Bhandar’s mountains and record the damages. “Visiting the locations, it became apparent that 50% of the schools can be repaired and made earthquake-proof with minimal efforts “, he reports. Quickly erected makeshift schools now ensure that meanwhile, at least the continuation of classes is possible.

Unfortunately, social unrest after the passage of the new Nepalese constitution hinders the reparation works in the country. “Blocked borders prevent us from importing food, construction materials and fuel”, Horst Hansel recounts. “Each and every steel beam has to be carried by feet to Bhandar, since trucks are no longer available.” Before the onset of winter, the children in the children houses are to have a warm shelter again, upon application we could also provide construction materials for the reparation of the village’s school. “In 2016 already, we want to rebuild primary schools in Bhandar – as modern, stable buildings suitable for children”, he announces boldly. Plans are already made and with the support of 40 schools throughout the Rhein-Main area who participated in the “Your Stone for Nepal” campaign Childaid Network was able to collect a solid funds, additionally supported by the German government. “We are very pleased that we could convince the German Federal Ministry for Economic Cooperation to support the plan for Nepal additionally to the new vocational college in Amguri”, Dr. Martin Kasper states. “This way, the ruins of Bhandar turn into the children’s new vision for a bright future”, Kasper concludes confidently after the project reports.

The evening was rounded off with intensive conversations with the experts present and friendly exchange of all attendees.

To find out more about the ongoing projects and visions, check our projects’ site and stay updated with our blog.