Helping those displaced in their own country

For the last 20 years conflicts between separatist movements of the Bodo tribe, who gained autonomy for the region, and minority groups like the Santhals and Muslims have plagued Lower Assam. The violence has caused suffering of several hundred thousand people of the minority tribes, who fled into the national forests or in refugee camps. The children of the Santhals frequently grow up in these refugee settlements without access to basic education. They are at risk risk of being subject to a life of poverty dependency.

[infobox style=“alert-block“]Within the Santhali community in Assam there are only a handful of graduates, doctors and lawyers. With our support the first Santhali refugee children now pass their grade 10 examination.[/infobox]

Barefoot schools as a catalyst for development

Since 2007 we have supported basic schools in remote villages and refugee settlements in Lower Assam. They are called barefoot schools, because the income of the refugee families is so low that they are unable to buy sandals for their children. Bridging the time until the government steps in, we consider this to be a temporary, but important remedy.

Some of the schools have been expanded over the years and now offer regular primary school education up to grade 5. In addition, two high schools in Amguri and Joypur have been developed in this program up to grade 10.

Conscious understanding of the value of education

Buildings for the barefoot schools will usually be set-up by the communities themselves. A village educational council monitors the activities of the school. In this process, the community accepts responsibility for the success of the schools. We finance the teachers, their training as well as teaching and learning materials. The children get the chance to grow up as self-confident Santhals and become role models in their communities. communities. In a tribal community composed mostly of illiterates pursuing education gradually becomes the rule.

Project locations of our refugee schools in Lower Assam (Notheast-India) 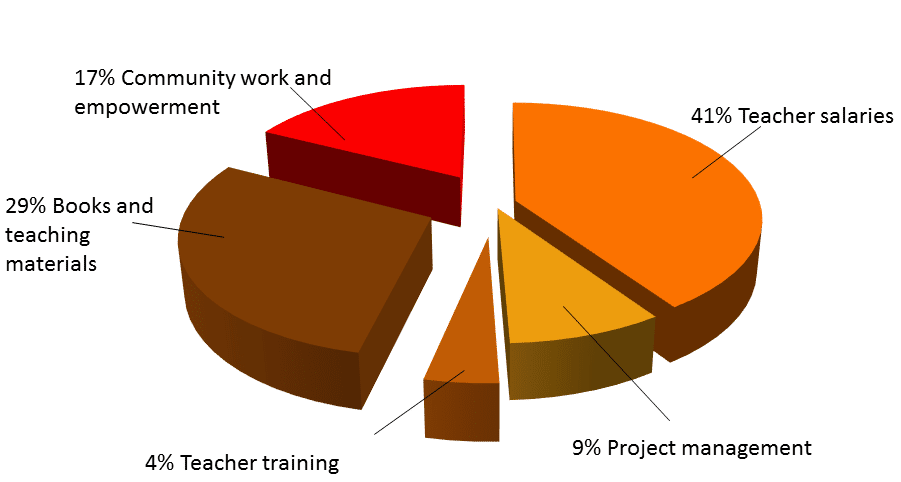