Education on the roof of the world

It is only a stone’s throw to Mount Everest. However, the life-styles of the people living here and those who prepare for their climb in the base camps are worlds apart. In addition, the omnipresent cast system remains an insurmountable obstacle – more so than the highest mountains. Therefore, it is still not commonly accepted in the region that everybody has a right to education. Besides, teachers are scarce, as they shy the hardships of life in the region of Bhandar.

A partnership for the Bhandar Region

25 years ago, teachers of the Helene-Lange High School in Wiesbaden/Germany took on the challenge to bring basic education to the region. Since students, teachers and parents of the school as well as many friends have collected donations, organized rallies and conducted bazaars with tireless dedication.
They started „Children-of-Bhandar“. In Nepal the NGO implementing the projects is called FRADS.

The result is impressive: 30 schools were started. They built a health center with five branches as well as an orphanage. The team hired teachers and nurses and provided school uniforms and teaching aids to the students.

Now more than 6,000 school-children can learn and play instead of working in the fields. Talented graduates, mostly untouchables, receive scholarships to continue their studies in the distant capital Katmandu. Many of them come back to their villages to help those left behind. In a next step we now want to offer vocational training for young people in Bhandar. Besides, we shall invest into the advanced training of teachers to improve quality of teaching.

A future for Bhandar after the earthquakes of 2015

Bhandar is located not far from the epicentres of the earthquakes that shook Nepal in the spring of 2015. One of the poorest regions of the county was thrown back by years: schools and almost the entire infrastructure have to be rebuilt.
The Childaid Network and the Children-of-Bhandar teams jointly with FRADS quickly brought emergency aid to the people of Bhandar after the earthquake. Already at the beginning of the new school year, temporary schools were put in place. The children in the orphanage received a provisional home as a temporary shelter.
Currently, 6 modern and earthquake-proof school-buildings are under construction. Further schools are being or will be repaired. Extensive repairs on the main building of the orphanage and the construction of a new building with modern sanitation, kitchen and dining facilities has been completed. In addition, we are helping to introduce modern teaching methods and have started a teacher training program. To complement the health posts we have initiated health camps which are held at regular intervals in cooperation with the hospital at Jiri.

Our project sites in Nepal

With 75 Euro
a month we can finance the salary of a teacher in Nepal. Sponsor a teacher now. 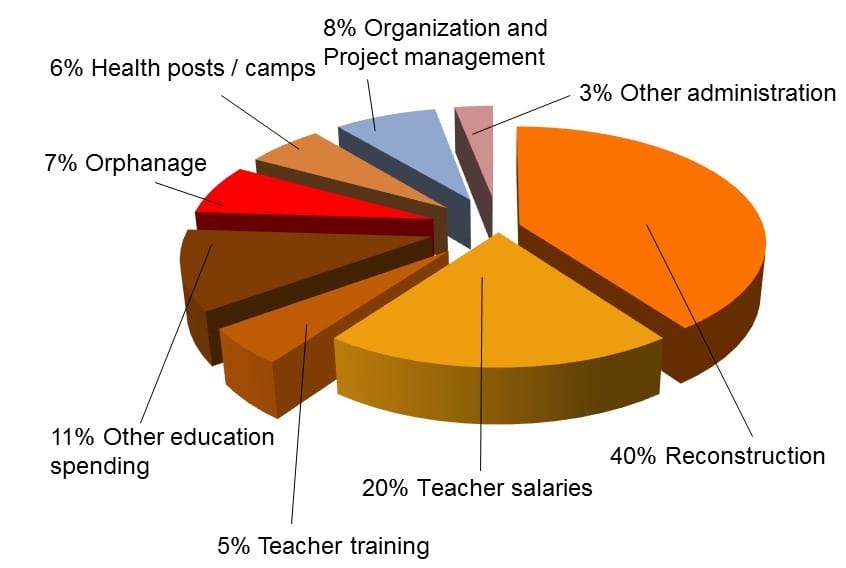